Researchers at the RIKEN Center for Brain Science (CBS) in Japan have discovered a deficiency in the brains of people with schizophrenia that could lead to the development of new drug therapies. A postmortem comparison published in Schizophrenia Bulletin revealed that schizophrenia was associated with lower than normal levels of S1P, a type of lipid (fatty) molecule found in the white matter of the brain. Preventing S1P degradation might therefore be a new direction for drug development in treating schizophrenia.

In recent years, drug therapy for schizophrenia has come to a stand-still. Most of the drugs available for schizophrenia are based on dopamine, but they are ineffective in about one out of every three patients. “Because we don’t have another angle on what causes schizophrenia, many pharmaceutical companies are pulling out of schizophrenia-related drug development,” says Takeo Yoshikawa, team leader at RIKEN CBS. “Hopefully, our findings can provide the new angle with a new target for drug development.”

Although schizophrenia is a well-known mental disorder that affects the brain, how it does so remains somewhat of a mystery. Scientists have known for some time that the brains of people with schizophrenia have less white matter than normal brains. White matter in the brain is made from oligodendrocytes, special cells that wrap around the parts of neurons that carry outgoing signals, which helps them communicate with each other. Characteristic symptoms of schizophrenia include hallucinations and the inability to distinguish reality from fantasy, which might originate in white matter abnormalities that cause irregular communication between neurons.

Yoshikawa and his team at RIKEN CBS investigated sphingolipids, a group of lipids known to have many functions, some related to white matter. Postmortem analysis of the large white matter tract that connects the left and right sides of the brain showed a severe deficiency in S1P, a sphingolipid necessary for oligodendrocyte production. Further tests showed that although normal amounts of S1P had been produced, it was metabolized and degraded when it should not have been. “Drugs that prevent S1P degradation could be particularly effective in treating schizophrenia,” says first author and postdoctoral research scientist, Kayoko Esaki. 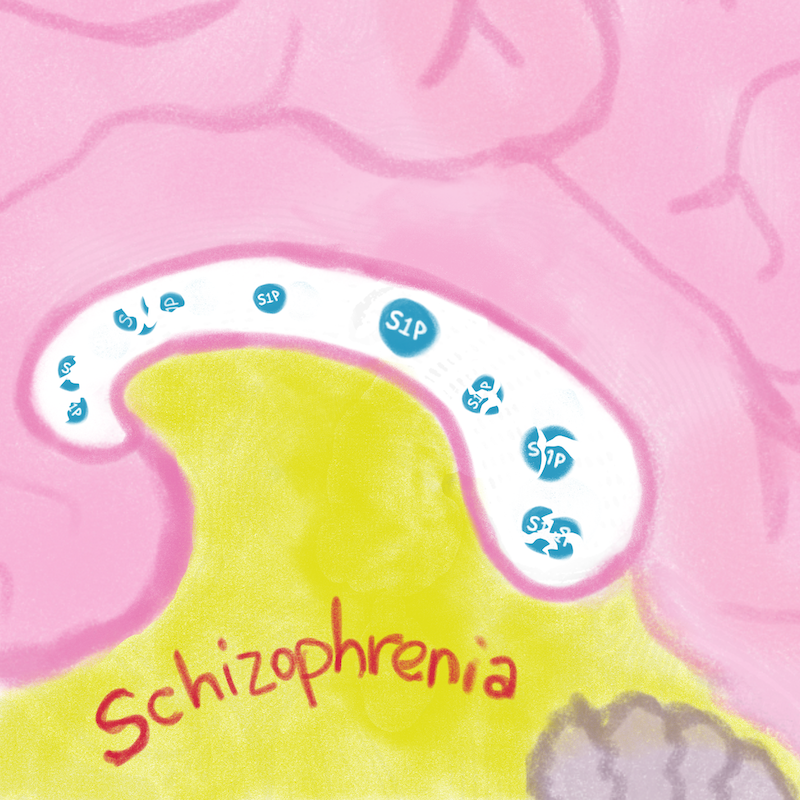 Compared with postmortem brains of healthy adults, S1P levels were much lower in the corpus callosum of people with schizophrenia. Further analysis showed this was likely because of excessive degradation. S1P receptor agonists are therefore a potential new target for drug development in the treatment of schizophrenia. 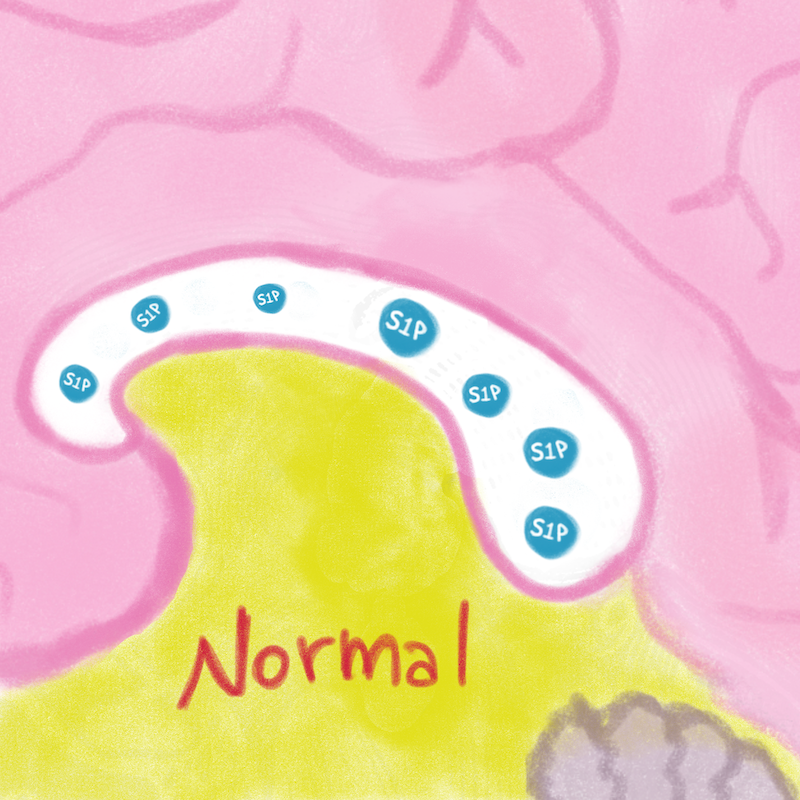 Although the experiment sounds simple, measuring S1P levels in postmortem brains was a big challenge and required interdisciplinary expertise in chemistry—specifically mass spectrometry—that was brought to the team by Esaki. “This was the first psychiatric study of the postmortem brain to use mass spectroscopic analysis, and our discovery would not have been possible without our newly established comprehensive technique for screening sphingolipids,” says Yoshikawa.

After finding S1P sphingolipid deficiency in schizophrenia, the researchers examined postmortem brains of people with bipolar disorder or major depressive disorder. They found that S1P levels did not differ from what they found in normal brains, indicating that the problem is specific for schizophrenia, and not a common feature of mental disorders.

Before schizophrenia specific clinical trials can begin, studies in animals will be necessary. “The next important step,” says Yoshikawa, “is to determine precisely which S1P receptor-acting drugs are effective in experimental animals. Although the new blockbuster drug fingolimod works at the S1P receptor and is effective at treating multiple sclerosis, we do not yet know how effective it would be for schizophrenia.”