A new imaging biomarker for the aging brain

Researchers at the RIKEN Center for Biosystems Dynamics Research (BDR) in Japan have identified changes in the aging brain related to blood circulation. Published in the scientific journal Brain, the study found that natural age-related enlargement of the ventricles—a condition called ventriculomegaly—was associated with a lag in blood drainage from a specific deep region of the brain. The lag can be detected easily with MRI, making it a potential biomarker for predicting ventriculomegaly and the aging brain, which can then be treated quickly.

Ventriculomegaly is an abnormal condition in which fluid accumulates in the ventricles of the brain without properly draining, making them enlarged. Although ventricular enlargement within normal range is not itself considered a disease, when left unchecked it can lead to ventriculomegaly and dementia resulting from normal pressure hydrocephalus. In their study, the team found that ventriculomegaly was associated with changes in blood circulation of the brain. “We found an age-related perfusion timing shift in the brain’s venous systems whose lifespan profile was very similar to, but slightly preceded that of ventricular enlargement,” explains first author Toshihiko Aso.

After blood circulates through the brain providing necessary oxygen, the deoxygenated blood must return to the heart though our veins. This happens through two pathways, one draining blood from regions close to the surface of the brain, and the other from areas deep in the brain. By using MRI to measure changes in blood flow, the team at BDR recently found that as we age, the time it takes for blood to drain through these two pathways becomes out of sync. The result is a time lag between the deep drainage pathway and the surface pathway, which increases with age. 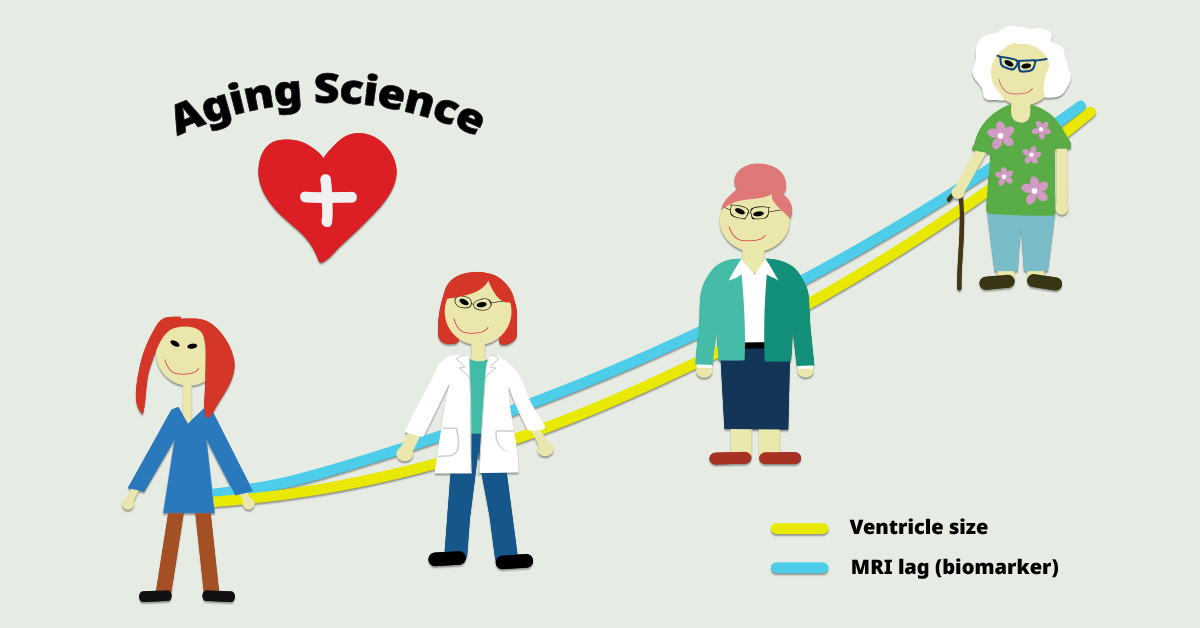 Lag in venous draining (blue curve) preceded increases in ventricle size (yellow curve). Increases in both were positively correlated with age and followed a similar pattern. This makes the lag observed via MRI a useful biomarker for predicting ventricle enlargement.

In the new study, the researchers found that in healthy aging, the time lag in circulation grows at almost the same rate as enlarging ventricles, but begins slightly earlier. A diagnostic MRI that measures an individual’s lag between the two drainage pathways might be a good biomarker for the aging brain, and a possible predictor of ventriculomegaly.

They also examined people with traumatic brain injury (TBI) because these individuals often suffer from enlarged ventricles and have brains that appear to have aged prematurely. Analysis showed a time lag in blood drainage that was related to the disease, but this effect depended on the age at injury, being large in people who suffered TBI when they were young, but much less for those who were injured later in life. “The timing asynchrony between deep and superficial venous drainage might therefore be a common mechanism that underlies both types of ventriculomegaly,” says Aso. “This new biomarker might therefore be useful for diagnosing and monitoring normal-pressure hydrocephalus that is either age-related or that results from brain injury.”

Because dementia resulting from hydrocephalus can be reversed by removing the fluid that builds up in the ventricles, early diagnosis is critical and the researchers at BDR are already developing non-invasive applications of this technology. “We hope that using this biomarker to monitor the aging brain becomes a part of the annual health checkup system for people in Japan.” ✅