Researchers led by Azusa Inoue at the RIKEN Center for Integrative Medical Sciences (IMS) in Japan have discovered a gene responsible for prenatal death when critical transgenerational instructions are missing from egg cells. Published April 28 in Genes & Development, the study shows that in mice, failed epigenetic suppression of an X-chromosome gene called Xist leads to miscarriage and developmental abnormalities.

“This study identified genes critical for fetal development whose expression is controlled by histone modifications transmitted from eggs to the next generation,” says Inoue. “The findings have implications for understanding infertility and developing treatments.”

For embryos to develop normally, egg and sperm cells need to receive important biological instructions before they meet up. Once an egg is fertilized, some of these instructions tell genes to be turned on or off depending on whether they came from the mother or father. This process is called genomic imprinting and is the focus of the new study.

When modifications in gene expression are passed on to the next generation, they are called transgenerational epigenetic changes because they’re inheritable changes even though the DNA code remains unchanged. Inoue and his team have been studying a specific set of transgenerational epigenetic instructions given to egg cells called histone H3 lysine 27 (H3K27) trimethylation. In previous studies, they found that preventing these instructions led to prenatal death, particularly for male embryos, and also to enlarged placentas in the mothers. The new study asked whether those outcomes were directly related to failed imprinting. 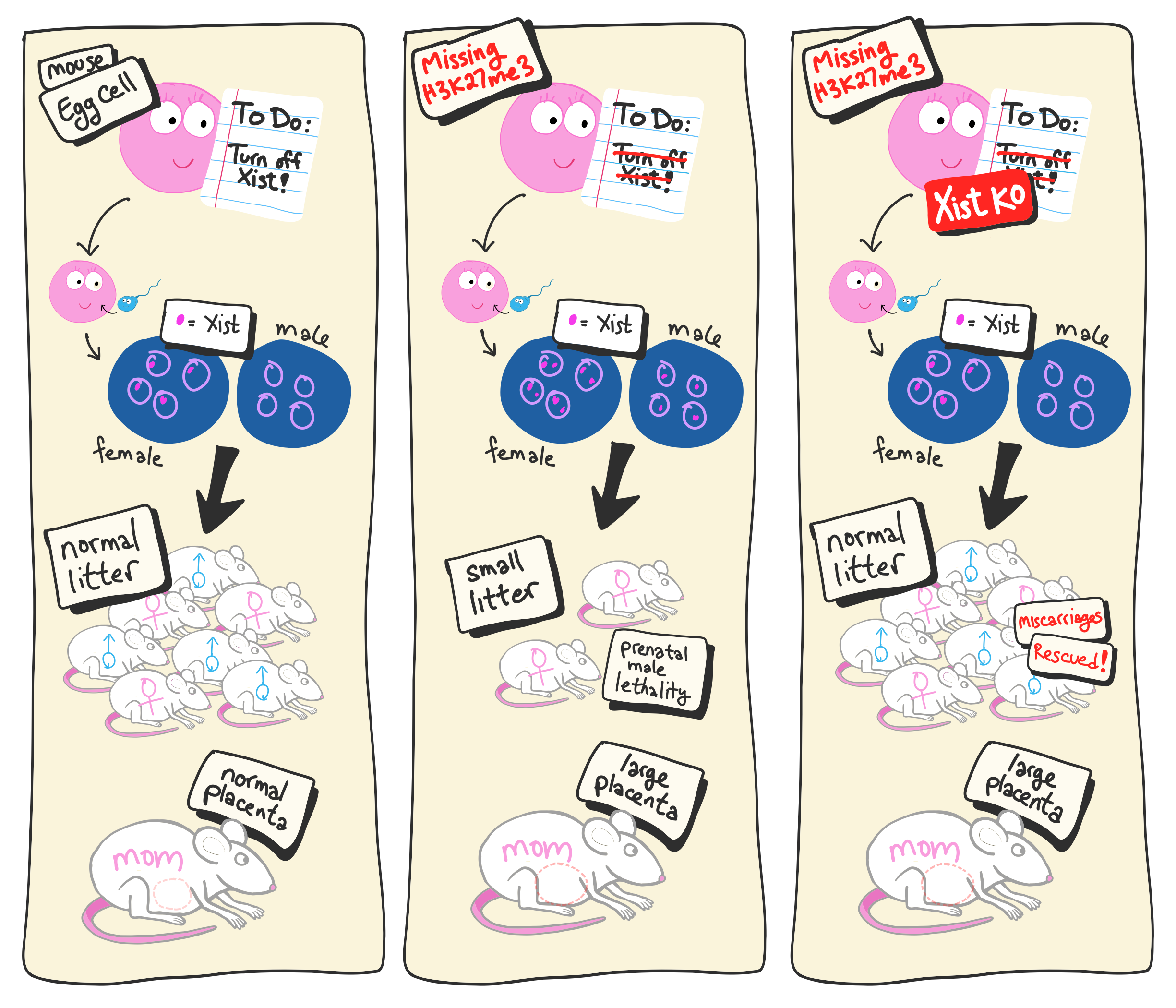 Cartoon rendering of the first experiment. (Left) The normal situation in wildtype mice. (Middle) When egg cells do not contain H3K27 trimethylation (the instructions) Xist is not turned off. This results in Xist being produced, which inactivates the X chromosome. In males, this is lethal because they only have one copy. (Right) Additional knockout (KO) of Xist prevents this from happening: litter size and male/female ratios are normal, indicating rescue of prenatal death (miscarriages). Further KO of other genes that failed to imprint rescued the enlarged maternal placenta (not depicted).

The study began by knocking out a gene required for H3K27 trimethylation in eggs so that the transgenerational instructions could not be given. Next, the team added a knockout of the Xist gene to these eggs. Because the male offspring tended to die, the researchers suspected that the culprit was a gene on the sex chromosome. As it turns out, there are nine maternal genes known to be suppressed in embryos in favor of the ones with paternal origins. And only one, Xist, is on the X-chromosome.

The results were almost as expected. Prenatal death was greatly reduced, and the male-skewed lethality was gone after knocking out Xist. This showed that failed Xist imprinting was the reason for the prenatal death. However, the placenta was still enlarged. Reasoning that this was likely related excess expression of the other eight genes that failed to imprint, the team created eight different deletion mutants in the double knockout embryos. They found that for three of the genes, this resulted in normal-sized placentas.

“We succeeded in curing developmental defects in a mouse model that otherwise suffers from prenatal lethality and placental malformation due to the lack of transgenerational epigenetic instructions from mothers,” says Inoue. The researchers plan to conduct more experiments to determine how these specific biological instructions are established when egg cells are created, and whether environmental factors can influence the process. 🥚🚼