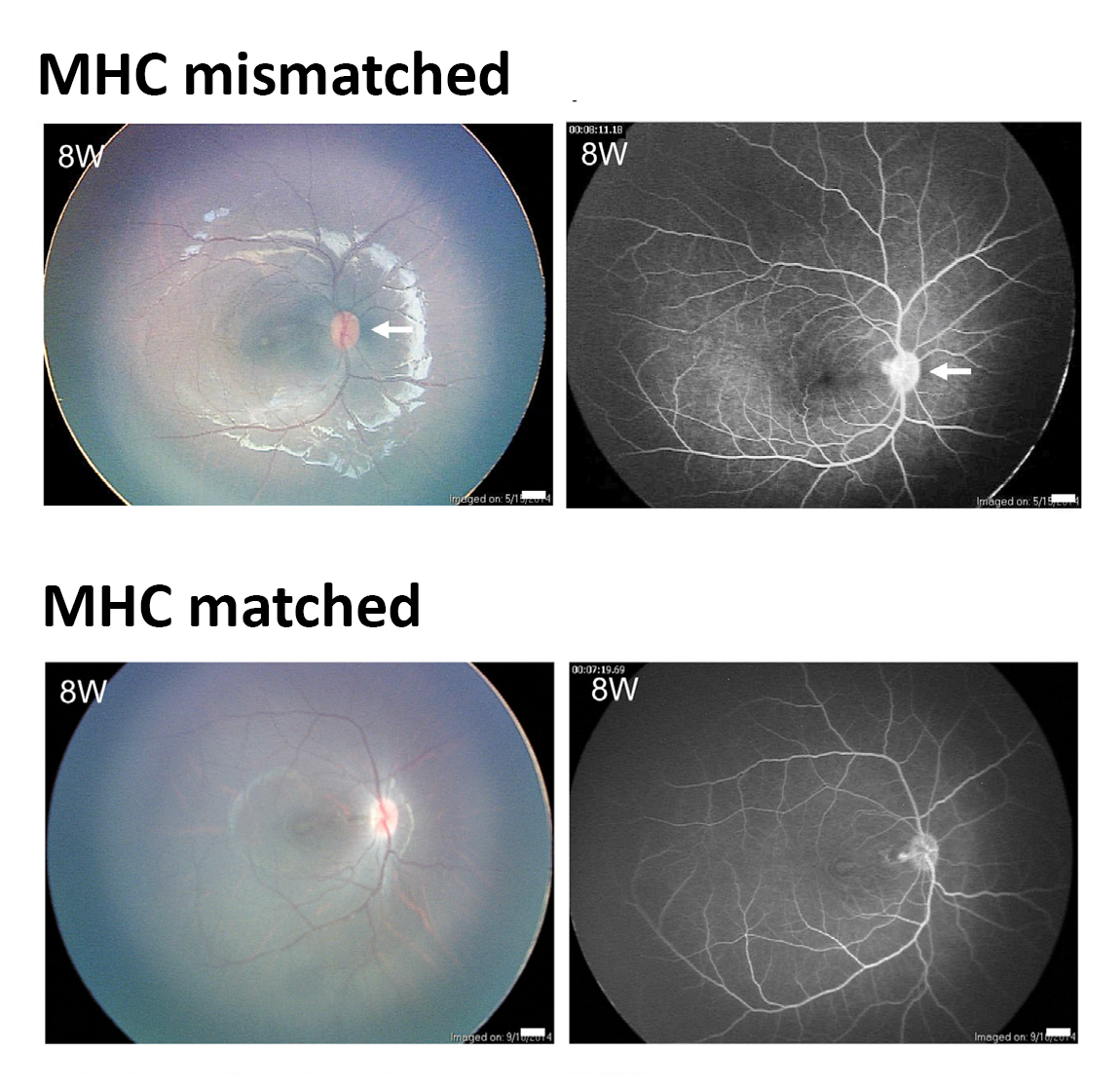 Researchers at the RIKEN Center for Developmental Biology (CDB) have successfully transplanted retinal pigment cells derived from stem cells of one monkey into the eyes of other monkeys without the need for immunosuppressant drugs. Published in Stem Cell Reports, the study shows that this procedure is possible as long as a set of cells called the MHC are genetically matched between the host monkey and the new retinal cells.

A realistic hope of modern medicine is to replace damaged tissue with healthy cells grown in the lab. Currently, adult cells can be reprogrammed into stem cells, and then re-differentiated and grown into desired cell types. The researchers at RIKEN CDB led by Masayo Takahashi have already begun a clinical transplant trial in people with age-related macular degeneration. The team grew retinal pigment cells from induced pluripotent stem cells (iPS cells, or iPSCs) and transplanted them into the damaged retina of a human participant. In order to avoid tissue rejection, they used autologous iPSCs.

While this method is sound, producing autologous iPSCs is costly. Additionally, because the cells must grow at the same rate as they do during normal development, a person would have to wait more than a year before a transplant could be performed. The hope is that a method for allogeneic transplant can be developed.

Lead author Sunao Sugita notes, “In order to make iPS cell transplantation a practical reality, the current goal is to create banks of iPSC-derived tissues that can be transplanted into anyone as they are needed. However, immune responses and tissue rejection are big issues to overcome when transplanting tissue derived from other individuals.”

The new study tested a technique called MHC matching as a way to overcome this issue. Major histocompatibility complexes (MHCs) are a sets of cell-surface proteins found in all cells that function in the immune system. In humans, MHCs are also called human leukocyte antigens (HLAs). There are many genetic variations of MHCs, and after transplantation, if the MHCs of the transplanted cells are not recognized by the T cells of the host immune system, there is an immune response and the tissue is rejected.

To test whether MHC matching is a viable method, the team used retinal pigment cells that were grown from monkey iPSCs in the iPS cell bank at the Center for iPS Cell Research and Application, Kyoto University. They transplanted the cells into the subretinal space in monkeys with either genetically matched or non-matched MHCs.

In a separate study published in the same issue of Stem Cell Reports, the researchers saw similar results when they repeated this last experiment with human T cells and HLA-matched or unmatched retinal pigment cells grown from IPSCs.

“Now that we have established the lack of immune response in monkeys and in human cells in vitro,” explains Sugita, “using the iPS cell bank appears to be a viable solution, at least in the case of retinal pigment epithelial cell transplantation.”

“In the next clinical trial,” continues Sugita, “we plan to use allogeneic iPS-retinal pigment epithelial cells from HLA homozygote donors. The clinical data after the transplantation will allow us to see if the iPS cell bank is truly useful or not. If so, I think this type of transplantation can become standard treatment within 5 years.” ?