Social novelty in the brain: haven’t I seen you someplace before?

Researchers at the RIKEN Center for Brain Science (CBS) in Japan report that a part of the mouse brain called the SuM is specialized for detecting new experiences. Within the SuM, responses to experiences related to unknown individuals—called social novelty—were segregated from those related to unfamiliar places—called context novelty—before being sent to distinct parts of the brain’s main memory-formation center. This discovery can help us understand normal memory, as well as conditions in which recognizing and reacting to new information is impaired. The study was published in the scientific journal Nature.

Meeting someone for the first time or entering an unfamiliar apartment is a much different experience than meeting an acquaintance or walking into your own home. Normal social interactions, daily functions, and even survival can depend on being able to make the distinction between the unknown and the familiar. Almost all animals seem to be born with this ability, and like other innate behaviors, the team at RIKEN CBS hypothesized that a region of the brain called the hypothalamus might be involved.

To test this hypothesis, they exposed mice to two types of novelty: contextual or social. The novel context was an unfamiliar cage with a few landmark objects and the social novelty was an unfamiliar juvenile mouse. They found that overall brain activity in a part of the hypothalamus called the SuM was much higher in these novel situations than when mice were placed in familiar cages or near familiar mice. “The hypothalamus is a very highly conserved region of the brain across evolution, mostly thought to be involved in innate behaviors like feeding, mating, parenting, and fighting,” says Team Leader Thomas McHugh. “Our data suggest that it could also serve as a link between these survival-type behaviors and higher cognitive function.” 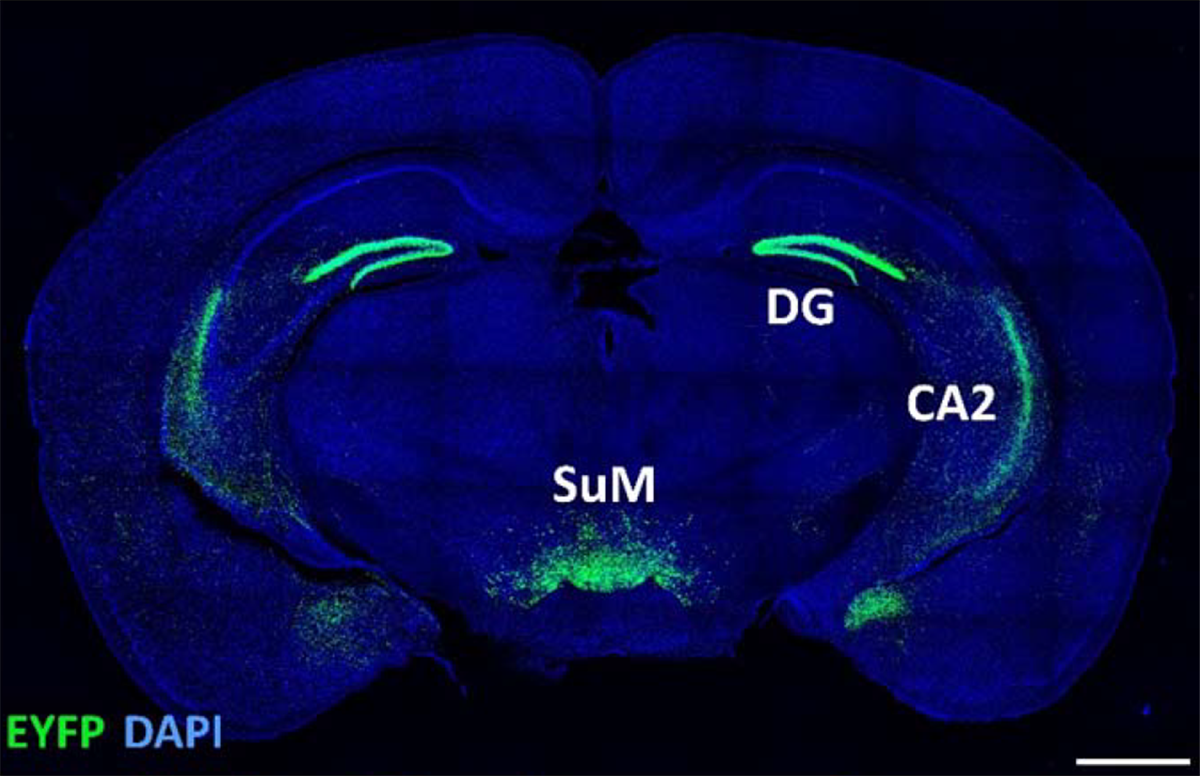 The supramammillary nucleus (SuM) of the hypothalamus projects to the CA2 and DG regions of the hippocampus. Injection of Cre-dependent AAV in SuM-Cre mice resulted in SuM-restricted eYFP (green) expression and strong terminal labeling in the DG and CA2 of the hippocampus. Scale bar, 1 mm. Experiments showed that memories of social novelty require the SuM-CA2 connection, while memories of novel places/contexts requires the SuM-DG connection.

Surprisingly, although the SuM signaled novelty overall, the majority of individual brain cells in the SuM only responded to one or the other type of novel situation. This is the first time that anyone has found a social/contextual split within a novelty circuit in the brain. In order to see how far the separation went, the team needed to create a new transgenic mouse line that would allow them to see exactly where these SuM neurons project and what they do.

A series of experiments showed that the neurons in the SuM connect with two parts of the hippocampus, the part of the brain known for being involved in memory formation and storage. Neurons that were selective for contextual novelty connected to the DG part of the hippocampus, while those that signaled social novelty were connected to the CA2 region.

Scientists often use novelty tests to assess memory. Mice explore new places and approach unfamiliar mice, making these behaviors both signs of novelty, and by inference, a lack of memory.

McHugh and his team used optogenetic light stimulation to show that output from the SuM directly affected social and contextual memory. For example, exciting the SuM-to-CA2 connection with blue light caused mice to behave as if they had a selective deficit in social memory; they frequently approached familiar mice as if they had never seen them before, but did not explore familiar rooms more than control mice. Likewise, they saw the reverse behavioral pattern when the SuM-to-DG connection was excited. 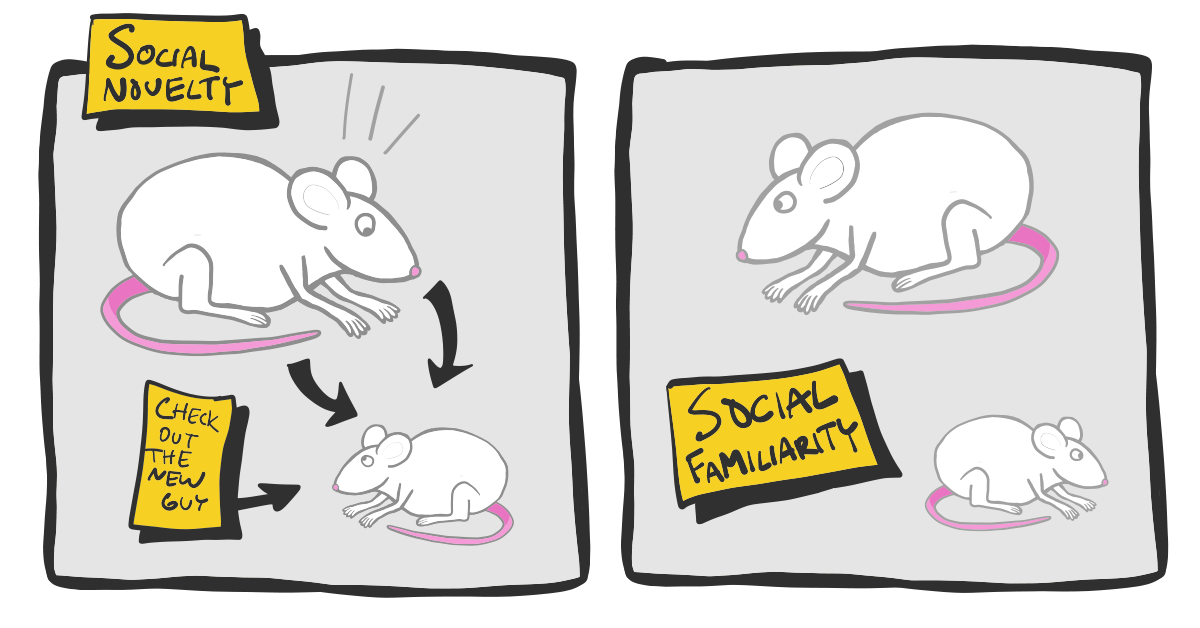 Accurately detecting contextual and social novelty allows us to adapt our behavior appropriately to changes in daily life. “Understanding how we recognize and react to novel information is fundamental to understanding memory,” says McHugh. “Not only does novelty strengthen memory, both in mice and humans, impairment in recognizing and reacting to new information often accompanies psychiatric conditions. This research can thus provide a biological target to examine in such cases.”

Now that we know that socially and contextually different experiences are separated in the hypothalamus and continue to be segregated in the hippocampus, we can ask why. What is could be the evolutionary advantage to this system in the brain? McHugh thinks that at a fundamental level, these two types of experiences might use different sensory components. “At the level of the hypothalamus, the benefit could be that social and contextual novelty are triggered by different types of sensory information and thus linked to different types of innate responses,” he says. “At the level of the hippocampus, while the both are components of episodic memory, we often only need to update one or the other — experiencing a new place with an old friend or meeting a new colleague in a very familiar environment.” Because the two types of memories are formed independently from each other, it might allow existing memories to be updated without having to overwrite old experiences or form new ones. ✅