Ahexagonal lattice organizes major cell types in the cerebral cortex, researchers in Japan have discovered. The pattern repeats across the brain, with similar cells synchronizing their activity in ‘microcolumns’, which could represent an essential computational unit in the brain.

The neocortex, the convoluted structure that covers much of the mammalian brain like a sheet and controls motor actions, language, and sensing, is more than just a tangle of gray and white matter. Precision wiring connects cortical areas, but regular, repeating modules that could underlie neural information processing brain-wide have not been observed. “We think we have found a functional unit of the cortex, a repeating ‘processor’ across which the brain’s computation is distributed, like in parallel computers,” says Toshihiko Hosoya, research team leader at the RIKEN Brain Science Institute. His group’s study, more than 10 years in the making, was published in Science on November 3.

“The concept of columns in the brain is not entirely new,” observes Hosoya, referring to orientation and ocular dominance columns found in the visual cortices of monkeys and cats. “What is new is finding neurons organized in columns across multiple brain areas. Our results suggest that the same functional units could underlie very different types of brain functions, from sensory perception to motor control.” 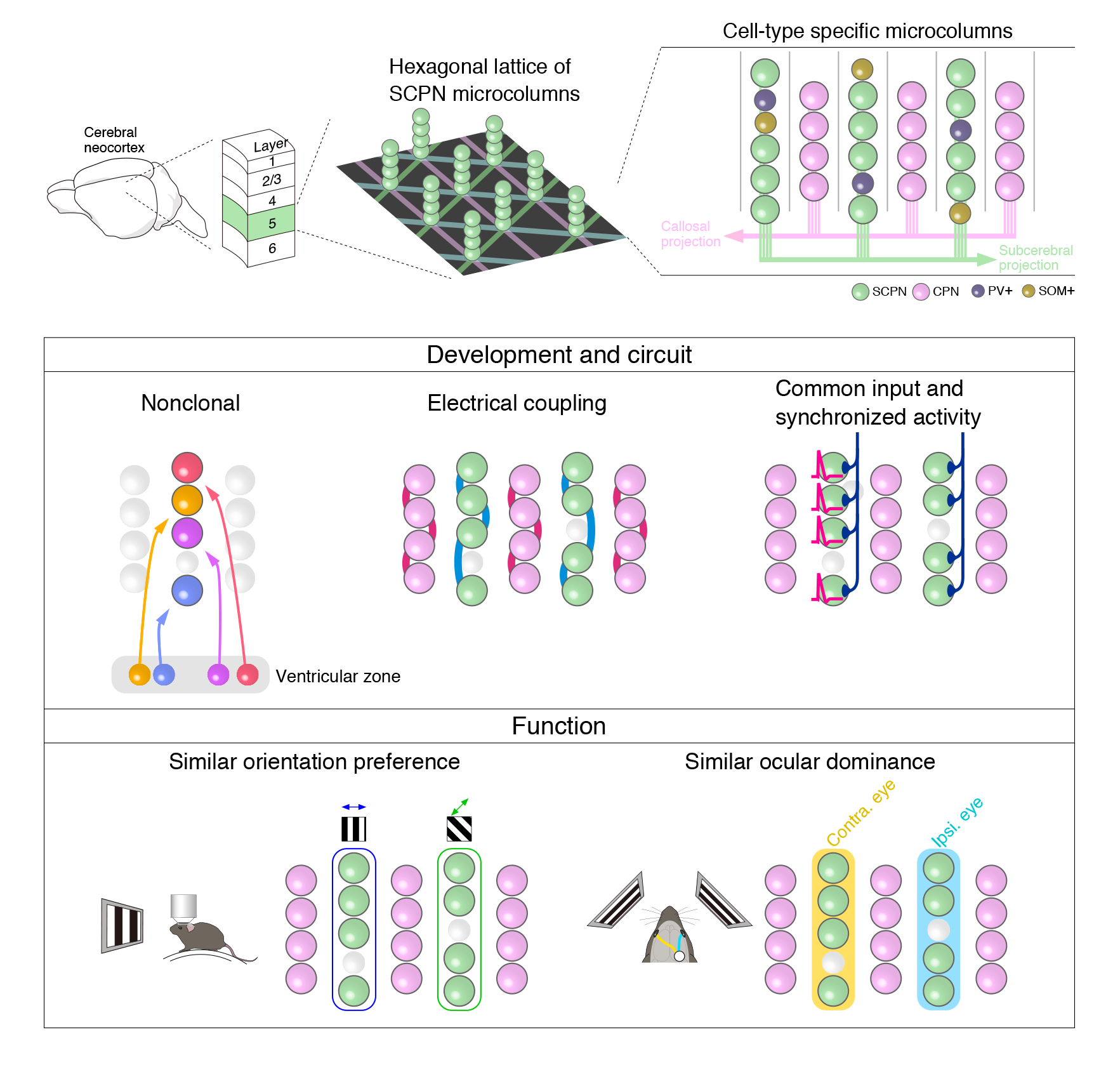 Schematic showing the organization and development of microcolumns for orientation preference and ocular dominance in mouse visual cortex.

Technical advances in brain imaging facilitated the identification of microcolumns. Repeating roughly every 40 microns, such tiny columns may be missed because of the way brains are experimentally processed. “The angle and thickness of a brain slice are very important, and the direction of a column can change even within a single slice, which could be the reason why they weren’t noticed before,” says Hosoya. Using 3D anatomical methods, including two-photon imaging and cell-type-specific labeling, the researchers found that columns are arranged hexagonally in layer V of the cortex. This is a major output layer with two distinct pyramidal cell types that are comparatively large, sparse, and easily labeled. Microcolumns contained only one or the other cell type, and neural activity within each column was also synchronized. Hosoya’s group is currently investigating whether other cortical layers also contain microcolumns, as well as whether this architecture is separate from or subsumes known visual cortical columns in other species—given that microcolumns show similar response properties.

As for why the columns are arranged hexagonally, “it may just reflect the most efficient way to pack them together,” says Hosoya. “However, in all the mice we studied, the hexagons were oriented the same way with respect to the brain’s surface. If it was just about packing, they could be oriented randomly, but we didn’t see that. This conserved directionality may suggest that the lattice evolved as an efficient solution for diverse brain processes.” The cortical circuit—the metaphor borrowed from computers to explain how the wiring of neurons realizes information processing—has long been a holy grail in neuroscience. “In computers, a modular architecture can determine how the computation is executed, and many parallel computation models have a hexagonal structure,” Hosoya notes. “Now we have some evidence that small identical computational units—microcolumn modules—underlie the architecture of the cortical circuit, at least in layer V.”

One suggestion is that fundamentally understanding one elementary unit can reveal the whole brain’s activity, says Hosoya. “Since we identified microcolumns across different brain regions, the same underlying computation may serve completely different functions. It’s exciting to think that by understanding 10 or so neurons in one microcolumn, we could actually explain the activity of the 15 billion neurons of the neocortex.” ?