Out on a limb: the many ‘brains’ of the octopus 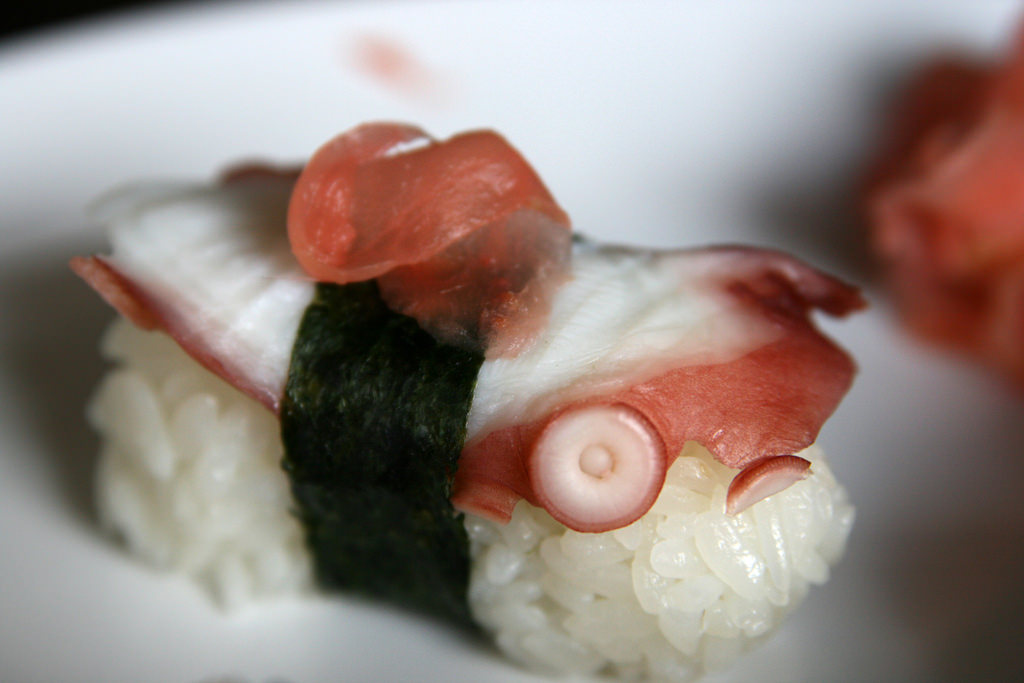 For some, this is a delectable piece of octopus sushi, but to Jean-Pierre Bellier, this is a part of the most intriguing and complex nervous system that he has ever seen. About 70% of the 500 million neurons of the octopus nervous system are not in the central brain, but rather in its arms. This arrangement gives the arms a great deal of autonomy, effectively giving the octopus eight brains for the price of one.

As a neurochemist and anatomist, Jean-Pierre is interested in the chemicals that let brain cells talk to each other and how signals like pain can be regulated. This led him to the octopus, a cephalopod that doesn’t have bones and can even regrow an arm if it’s cut off. Unlike vertebrates, the octopus isn’t wired to first sense things at the periphery of its body (like we do with fingers) and then process that information to take action via a central brain. The octopus arm can plan and execute actions on its own and even do a lot of sensory processing. It’s still unclear how this happens, but what is known is that there aren’t that many connections from the brain to the arms. Through the course of evolution, the neurons have moved to where the action is — the arms, which are vital for touching, grasping, tasting, mating, camouflage and much more.

You can watch Jean-Pierre’s presentation from Nerd Nite Tokyo on YouTube, along with two other talks on wildlife soundscapes in Okinawa and the economics of the sex industry in Japan. ✅

Nerd Nite Tokyo is a series of monthly science talks in a bar. More information at tokyo.nerdnite.com.

Nerd Nite Tokyo #23. Play starts at the 2nd talk (Jean-Pierre’s): How Does an Octopus Arm Think?

Not enough? Watch octopus vs. shark!

Blogging about brains on Neurographic