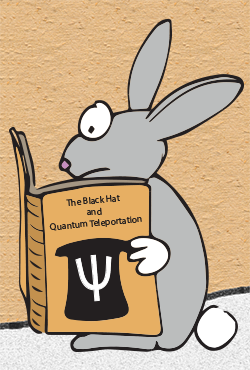 Let the blogging begin! The rabbit is out of the hat, or at least starting to emerge. Welcome to the blog of the RIKEN Global Communications Team. Our aim with this blog is both to highlight the fascinating and important research being done at RIKEN, but also to provide interesting background information to help people understand the concepts discussed, and also to give people insights into what we are up to.

Our logo, which was created by Adam (and which was inspired by his own cartoon that you see in this post), illustrates the theme of the blog. Partly we chose “It ain’t magic” because we are from a scientific organization, in a scientific world, and we wanted to stress that we are dealing with science and not magic. We also wanted to stress that even complicated, sometimes esoteric topics that might at first seem magical, can be understood by non-specialists when they are explained well (hey man, it’s not magic or rocket science … but …um … it might be topological insulators or spintronics).

If you’re dying to know, the Ψ (greek letter psi) is the symbol for a qubit (a quantum bit) that was transported (i mean quantum teleported) recently (but not by RIKEN – insert sad emoji here). So, if you are just learning about RIKEN or a new scientific topic, you might be like the rabbit poking its head out of the hat.